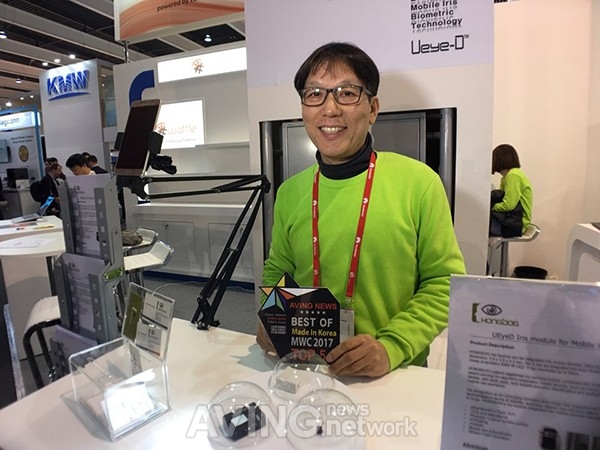 'Best of MADE IN KOREA at MWC 2017 Top 5' was chosen by global media AVING news, with consideration to the latest IT trends, growth rate and potential that Korean companies that have shown in the European market.

Hongbog, which participated in the Korea Information and Communication Technology Industry Association (KICTA) exhibition, received a lot of global attention from the industry and buyers for the iris recognition module 'UEyeD MobileSSP'. Unlike the existing module, which is built-in, Hongbog's UEyeD MobileSSP can be combined with an Android phone and can recognize even with just one lens.

Companies such as Qualcomm, Israeli mobile threat defense company Zimperium, and French firm Trusted Objects visited for business negotiations. "I would like to take this opportunity to further develop our technology and make a full-fledged entry into the European market," said Goong Jong Nam, the CEO of Hongbog.

Meanwhile, 'Mobile World Congress 2017' was held from February 27th to March 2nd at Fira Gran Via in Barcelona under the theme 'Mobile: The Next Element'. Innovative products, services and technologies that embody the mobile ecosystem were all in one place.

The global news network Aving News, which has delivered the most number of news issues from CES, MWC and IFA, the world's top three tech exhibitions over the past decade, also sent a special report team to the MWC to report on major issues in the market. Also, as part of the 'MADE IN KOREA & MADE BY KOREA' project, we found companies from Korea that participated in the exhibition and introduced them to the world.